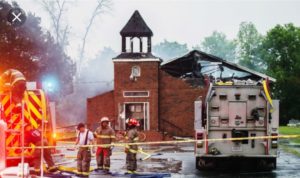 A great number of words have been written about the Notre Dame fire in Paris on April 15. There is a large outpouring of sympathy and claims of solidarity with regard to the situation. It will take many years to rebuild and restore the building. While Americans are focusing on this, I would like to respectfully point out that there are many other churches as well as buildings of international significance that have been damaged or destroyed and these deserve just as much attention.

Here in the United States, specifically Louisiana, some scumbag arsonist burned down three churches only a few weeks ago. All of the buildings were over 100 years old. All of the churches are Baptist and are historically and predominately black. It would have been nice to see people pay as much attention to this as they did to Notre Dame. Paris is over there, Louisiana is over here. Its too bad that is took some public shaming to finally get people to address this.

Christian churches in Iraq have been systematically destroyed in the 21st Century. Much of the destruction was attributable to ISIL, but it started as far back as 2003. Our nation’s war to overthrow Saddam Hussein began a sequence of events that lead to widespread destruction of Christian heritage in Mesopotamia. It would have been nice if the mainstream media had paid more attention to this as well as the massive human suffering that occurred with these multiple wars.

If the reason to focus on Notre Dame is because of its importance to the world, then let us look at some other worthy and overlooked buildings. The roof was blown off The Parthenon in Athens during a wartime bombardment in 1687. Maybe we should talk about rebuilding The Parthenon. Aleppo was destroyed during the battles that lasted between 2012 and 2016. When you consider our federal government’s role in screwing up the Middle East, then Aleppo should be an equally deserved recipient of our goodwill.

Perhaps more charity at home or a focus of charity towards war zones is what we should be doing as Americans. It’s going to take a long time to rebuild Notre Dame. The Cologne Cathedral was damaged by Allied bombing raids during World War Two and restoration work has been occurring there for 70 years. There will be plenty of money to fix Notre Dame. Let the French government take care of it and let’s start giving equal attention to other worthwhile.