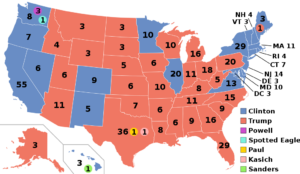 The Socialists in our country want to get rid of the Electoral College, even though it is a part of our Constitution.  They are working on a state-by-state basis to eradicate the Electoral College and replace it with a nationwide popular vote to determine who is the President of the United States.  This is driven by the fact that their losing candidates like Al Gore and Hillary Clinton were just that … losers.  Progressives want to change the rules because they often cannot win when they are forced to play by the rules.  It is one of many examples of liberals showing disdain for the United States Constitution.

If the Presidential election were to be decided by a nationwide popular vote, then Michigan would never receive any attention from the national campaigns.  Our automotive, agriculture and tourism interests would be ignored.  Everything would be focused on what sells in New York and California.  We need Presidential campaigns coming into our state and spending money.  Michigan needs the Electoral College to remain relevant.