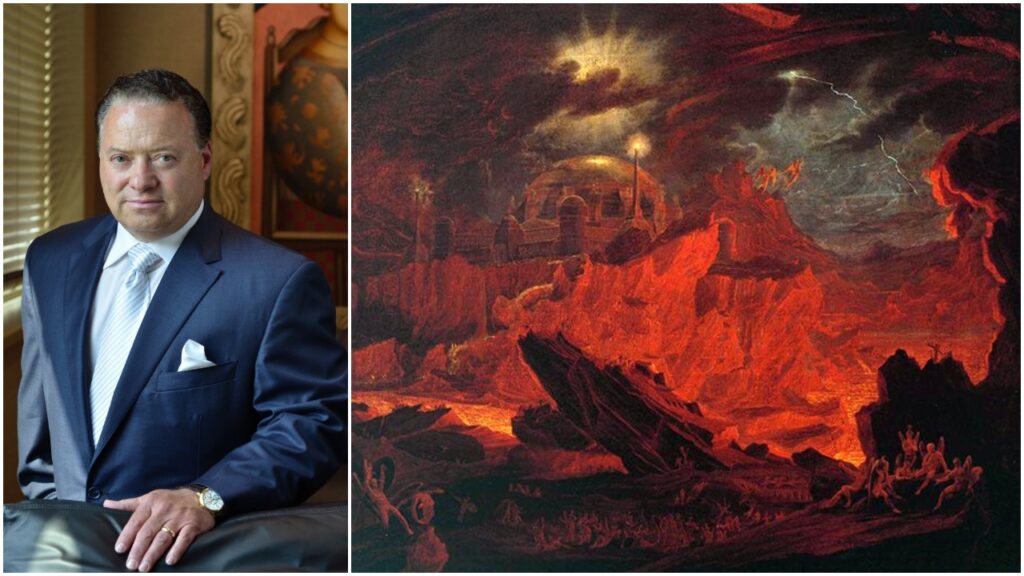 I need to expose a lowlife who has victimized the people of Michigan and been particularly cruel and unfair to members of the Chaldean community. I am talking about the shameless booze jockey and greed mogul, Tom Celani.

For those who are unfamiliar with Celani’s machinations, this is a man who proudly traffics in vice and sin. He is the type of man who will happily sell hooch for alcoholics to go home and beat their wives and neglect their families. He will gleefully fleece the pockets of the ignorant and the destitute as they hand over their life savings at casinos where he exploits Native Americans in order to accumulate his nefarious millions.

Celani once served as chair for the Michigan Responsibility Council to oppose the legalization and mainstreaming of the cannabis plant. It was not because Celani, who revels in depravity and has earned the nickname ‘King of Sodom,’ wanted to protect the community or the children. Nothing could be further from the truth. What Celani was worried about was protecting his profits, seeing cannabis as a competitor to his poisonous alcohol.

It should go without saying the difference between alcohol and cannabis is massive. Cannabis is legitimate medicine, a miracle drug that can successfully cure or treat many illnesses and alleviate symptoms for extreme pain in all cases. This is why the cannabis community defeated the most powerful interests on the planet. This is why we defeated the federal government, the corporate machine, systemic racism, some of the most powerful lobbies in the world, and a multi-trillion dollar propaganda campaign. We defeated the bad guys, we defeated Tom Celani, we defeated prohibition.

Celani grew up in the cutthroat beer wholesaling industry before reinventing his image as an upscale wine merchant. He learned the ins and outs from his father, who gifted him with his business, to ruthlessly snuff out competition by any means necessary.  This is why Celani is now coming to swallow up the entire cannabis industry that he fought to destroy for decades and to shamelessly take money out of the pockets of the small entrepreneurs who put up the initial capital and took the risk in order to thrive. Celani, whose sons run High Life Farms, a monopoly cannabis firm at war with caregivers, is a major proponent of the HB5300-02 bills that will create a “Big Weed” monopoly, squeezing every dime out of the medical patients, turning caregivers into criminals, and making marijuana a monopoly similar to his Beer and Wine Wholesalers monopoly.

Celani has reveled in putting his thumb over Chaldean business owners trying to make a buck. He laughs from his $12 million dollar mansion as he puts Chaldeans out of business and leaves our families broken and destitute. I am not sure if it is a racial superiority thing with Celani, but from all who know the man personally, they will tell you there is hate in this man’s heart. Hate for his fellow man. Hate for others who are doing well. Hate for anyone who wants to make something of themselves. The way Celani sees it, he owns the plantation, and Chaldeans may toil for a pittance while he lords over us and allows us our ability to earn.

We had to pay tribute to the likes of Celani and his Beer and Wine monopoly in order to stay in business owning our stores, our gas stations, our grocery businesses in order put food on our family’s plate for years. Celani was happy to exploit Chaldeans as we came over from Iraq, many of us with little resources. He used his power to squeeze us, forcing us to work those 20-hour days, while looking down on us in contempt. He sees us as less than human, as human chattel he and his minions can toy with to his heart’s content. We will allow him to pull the same scam in the medical marijuana industry.

We came from America to escape indignities. We came from America to enjoy our freedom and to thrive. We have done so, despite the best efforts of connivers like Celani who wish to hold us down. We will kowtow to the likes of Celani no longer. Thousands of Chaldean families are THRIVING because of the medical marijuana industry and the caregivers system, which works so well for the patients. We are organized, we are formidable, we will not be exploited any longer. It is time to give Celani a much-needed reality check that we will not be his doormats and we will not settle for his scraps. I call on all Chaldeans to unite against Celani’s anti-American monopoly tactics that will hurt our community for his own ruthless profit-seeking avarice.