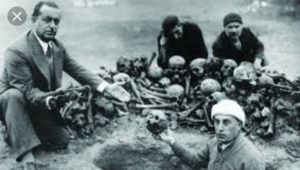 The Armenian Genocide was recognized this week on April 24th. It was the 104th Anniversary of the day the Turkish government arrested and executed a number of intellectuals in Constantinople. I wanted to wait until after that day to comment on the genocide out of respect for the Armenian community (some of whom are very good friends of mine). The Armenian people bore the brunt of Turkish atrocities and the focus and sympathy really belongs with them. We need to remember that the Turkish government also persecuted Chaldeans, Greeks and others. To this day the Turks still refuse to call it a genocide or admit they did anything wrong.

Its time for the government of Turkey to man up and accept responsibility for their atrocities of 100 years ago. There is no good reason not to accept the blame. Everyone who personally was involved in these acts of evil, such as Enver Pasha, are deceased. There is no way to do a war crimes trial like the civilized world was able to do against the Nazis or the Khmer Rouge. The world knows what happened and it is ridiculous to deny it.

Those of us who are members of Metro Detroit’s Chaldean community need to stand in solidarity with the Armenians. There were over 100,000 Assyrian and Chaldean Christians killed by the Turks concurrent to the Armenian genocide. Armenian-Americans in Michigan have done an exemplary job in raising and maintaining awareness of the genocide. The Turkish government has spent many dollars lobbying the United States in an attempt to prevent our government from calling the genocide they carried out as just that.

This genocide is something that we should never forget. Hitler used the Turkish example as his template to orchestrate the persecution of Jews, Gypsies and many others. He was famously quoted as stating “Who, after all, speaks today of the annihilation of the Armenians?”. The government of Israel and many others never fail to remind us of the Holocaust.

Everyday is a day we should the remember genocide. Today is an especially good day to do so since it is Easter for the Eastern calendar, which is what is observed by the Armenian Church.