I come to you with an urgent plea that you may not want to hear. It goes against all the propaganda you’ve been getting hit with wall-to-wall for weeks about Russia and Ukraine.

I am telling you with the utmost certainty: These attacks on Russian President Vladimir Putin are attacks on our President Donald Trump.

Do you remember who was the pawn, the coward, the scumbag, was who participated in the phone call that was used to impeach President Donald Trump when he was in office?

It was Ukrainian President Volodymyr Zelenskyy.

Zelenskyy is a globalist puppet. He is the crisis actor in chief of Ukraine. He is as illegitimate of a ruler of Ukraine as fake President Joe Biden is to America.

Is this what you really consider to be a masculine, patriotic hero all because the globalist fake news tells you he is?

Right now, every “Never Trumper” as well as Hillary Clinton, George Soros, NATO, the European Union are firmly on the side of Ukraine.

Few remember about the globalist-backed color revolution coup that happened in Ukraine back in 2014. Zelenskyy is an extension of this illegitimate coup government. Then-Assistant Secretary of State for European Affairs “Toria” Nuland, a bureaucratic lap dog of Barack Hussein Obama, propped up various extremist groups, including some neo-Nazis, to engineer a coup of a legitimate government in Ukraine.

It was successful, and then tens of thousands of Russian-sympathizing Ukrainians were butchered in the upcoming years as a result of this globalist meddling. They were targeted and murdered like dogs in the street. Meanwhile, Putin has taken measures to minimize casualties throughout his incursion into Ukraine, primarily targeting military installations and other strategic targets to reduce collateral damage.

These are the facts that the globalist fake news ignores. And the Never Trumpers, led by treasonous demon Mike Pence, are already seizing upon the propaganda. They are already tying Putin to Trump, an attack that will be used as Trump goes for the presidency once more in 2024.

This is all being staged a million miles in advance, and many well-intentioned Trump supporters are falling into the propaganda. They are falling into propaganda that will be used to harm Trump, just as the “Russian collusion” lies were used to hurt Trump and attempt to oust him from office through his first term as President.

Conservatives, I urge you: DON’T BE A PAWN FOR THE GLOBALISTS!

Ukraine is one of the most corrupt countries on the planet. Zelenskyy is an actor reading a script. He is no hero. He is hiding out and putting his people in grave peril, even risking World War 3 with his psychotic demands, in order to save his weak and pathetic puppet government. Remember, these are the folks whom Hunter Biden goes to when he needs another payout for more crack and hookers.

Please, for the love of God, snap out of it, and realize you are being played. Consider this your much-needed reality check. 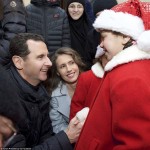 We were all hoping that Donald Trump was going to drain the swamp. His antics have encouraged us all, and his crushing victory over the political establishment last year was a watershed moment for the resistance. Nevertheless, Trump has lost his way on Syria. He ordered a bombing campaign last week that could very well help ISIS. We have to be careful to always support our President while simultaneously pressuring him to do the right thing when he goes astray.

Trump is making a very grave mistake in Syria by provoking Syrian President Bashir al-Assad. Assad is not who he is portrayed to be by the mainstream media. Assad is fighting Al Queda and ISIS in Syria, and he is a strong proponent of religious freedom for Christians. Christians can worship freely in Syria, unlike so many other countries in the Middle East. For this, Assad should be recognized as a hero. Instead, he is demonized by the globalists and other enemies of America.

Neocons and other warmongers point to Assad’s human rights record. It may be checkered. Saddam Hussein didn’t have the best human rights record either. The same can be said about Muammar Gaddafi. The neocons and warmongers called for those rulers to be removed from office as well, and it helped radical Islam more than anything. In Syria, the true enemies of America (the Washington D.C. swamp) want to give ISIS and Al Queda more power by starting war against Assad. These traitors know exactly what they are doing, and Trump is falling victim to their manipulations.

I can tell you from my family’s own experiences that a genocide against Christians has taken place in Iraq. Radical Islamists are to blame, but their murderous efforts have been aided immeasurably by American foreign policy blunders. Christian families that had been living in the region since the days of Jesus Christ have been wiped out or forced to flee. Saddam stopped this from happening as ruler of Iraq. Although he was repressive in many ways and did not tolerate dissent, Saddam also refused to tolerate radical Islam. He allowed Christians to worship freely as well. When American intervention got rid of Saddam, it opened the door for ISIS to slaughter thousands of Christians. The same thing is already happening in Syria, and it will get a thousand times worse with Assad out of power.

President Trump, your unprovoked and illegal strike of Syria was an act of war. This is not your mandate. You were elected to stop all of these ridiculous wars. You had said that the Libyan invasion was a waste. You criticized the Iraq war for many years. You urged Obama to stay out of Syria repeatedly back in 2013. We all know you are under massive pressure. We can only speculate about what the powers-that-be have shown you behind the scenes. We can only imagine how you and your family have been threatened by these evil powers, but you must stand strong.

President Trump, you were supposed to work with Putin and Assad to crush ISIS. No evidence has even been produced to the public indicating that Assad was responsible for last week’s chemical weapons attack in Syria. It could be a false flag, as it turned out to be after a similar situation occurred back in 2013. Middle eastern Christians were breathing a sigh of relief after you were elected, but they are now worried yet again. With U.S. Ambassador to the United Nations Nikki Haley calling for regime change, ISIS is emboldened. Christians are in jeopardy. Purge the neocons from your administration immediately. It is supposed to be America first, not ISIS first. Stand with Assad and middle eastern Christians.