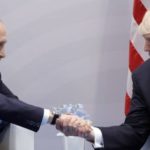 I always try to keep a laser focus on foreign affairs because it is extremely important and very rarely will the fake news media actually give you the truth about what is happening overseas. This is especially true pertaining to Trump’s recent summit with Putin.

After US President Donald Trump met with Russian President Vladimir Putin in Helsinki last month, virtually every elitist of our entrenched political class hollered the same refrain. They whined about treason, or Russian collusion, or about Putin being a dictator, blah blah blah. They would rather see us go to war with Russia, which would probably be World War III, than see us work together with the country on shared strategic interests.

There were very few men with the courage to stand strong with the President for extending the olive branch in times when peace and the settling of tensions are desperately needed. None of those brave folks who stood with the President had a higher public profile than Sen. Rand Paul.

Rand Paul arrived in Russia today and continues his Moscow visit right now. He endured an incredible battery of threats and ridicule in order to make this trip. He was on the receiving end of two terrorist attacks from deranged leftists triggered into action by biased mainstream media coverage against the President, one of which could easily have taken his life. His trip to Russia is already yielding results and may go a long way toward rectifying the damage done by the deep state between the two nations.

Paul announced today that Russian lawmakers have agreed to visit the U.S. Capitol in the near future. Paul met with Konstantin Kosachev, chairman of the Russia Federation Council Committee on Foreign Affairs, and the two men were able to come to that decision. They both believe that dialogue and engagement between the two nations are incredibly important. If we ever return to normalcy in our relations with Russia, we will owe Sen. Paul a great debt of gratitude.

Just like what happened in Iraq, the mainstream media launched a propaganda campaign to demonize Saddam Hussein so the deluded public would accept an aggressive, unnecessary war. They did the same thing to Muammar Gaddafi in the run up to his removal with an illegal war in Libya. They are maligning Putin not because of what he has done in the world. Truth be told, Putin’s crimes throughout the world pale in comparison to our own. We must remember the blood on our own collective hands before we unduly judge others.

The powers-that-be are calling Putin the next Hitler is because he stands against the globalist agenda, for his people, for the strength of his nation, and he is willing to ally with right-wing movements throughout the West who have similar goals. Putin may be heavy-handed in how he handles his business, but we regularly ally with authoritarian governments all the time. Just look at our long-standing allies in Turkey and Saudi Arabia, two Islamic dictatorships where Christians are tortured and open homosexuals are stoned. Putin and Trump have similar goals in stopping Islamic terror in the Middle East, and the nations’ economies are very much intertwined in the global economy.

Why should both countries not be safe and prosperous? Former President Obama was unable to secure electoral integrity back in 2016, and of course, those along with all other Obama-era disasters should be corrected. It is our responsibility to stop electoral meddling, just as it is Russia’s responsibility to stop any electoral meddling that the United States does. We should not sabotage diplomacy over espionage that is frankly routine and clearly had no impact on the actual result of the 2016 election.

Just listen to Obama himself explain how the 2016 election could never be rigged, not in a million years:

This is one of the rare cases where I agree with the former President. Trump won fair and square, and an alliance between Russia and the US should not be sabotaged because of the whining of sore losers. Protecting and strengthening the West is more important than satisfying the unstable emotions of crybaby Democratic cowards unwilling to accept responsibility for their own massive failure in 2016. That is exactly what Putin and Trump intent to accomplish, and these two leaders actually have the king-sized balls to pull it off.

Rand Paul is supporting the President and making it easier for him to pull off his heroic foreign policy agenda. We are finally defeating the neocons and returning to a policy of engagement rather than beligerence. This is what we hoped for when we were apart of the Ron Paul revolution. I would recommend all supporters of Rand and his father to rally around President Trump as he does incredible work overseas. Rand Paul could ultimately become the successor of Trump, continuing his legacy, building upon his foreign policy, and finally bringing the troops home from overseas in 2024. This is how we regain the lost momentum of the liberty movement!

Time to come together and unify around making America great again. We will unite around Trump in the homeland while Russia and the United States unite to make Western Civilization great again!