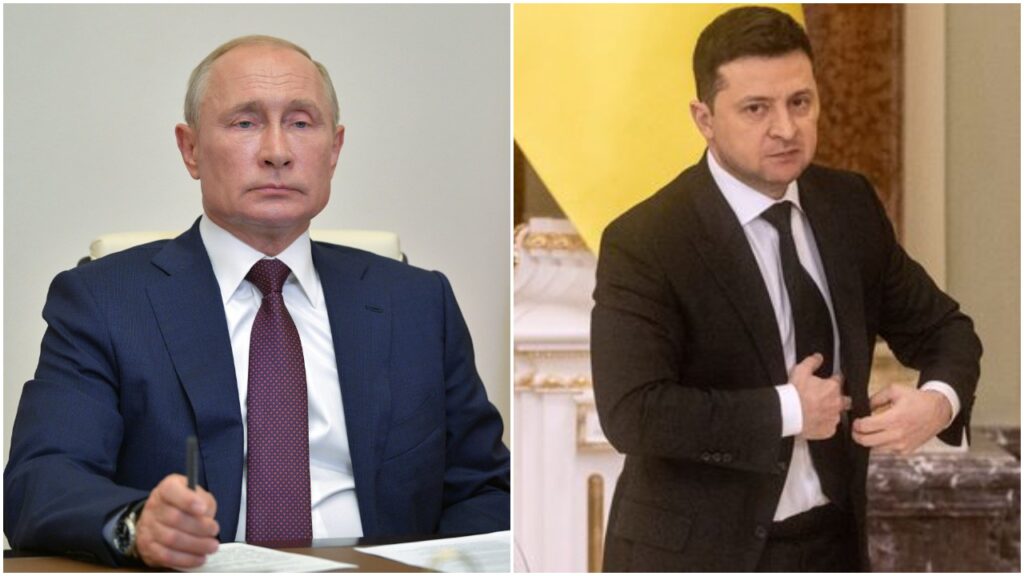 I come to you with an urgent plea that you may not want to hear. It goes against all the propaganda you’ve been getting hit with wall-to-wall for weeks about Russia and Ukraine.

I am telling you with the utmost certainty: These attacks on Russian President Vladimir Putin are attacks on our President Donald Trump.

Do you remember who was the pawn, the coward, the scumbag, was who participated in the phone call that was used to impeach President Donald Trump when he was in office?

It was Ukrainian President Volodymyr Zelenskyy.

Zelenskyy is a globalist puppet. He is the crisis actor in chief of Ukraine. He is as illegitimate of a ruler of Ukraine as fake President Joe Biden is to America.

Is this what you really consider to be a masculine, patriotic hero all because the globalist fake news tells you he is?

Right now, every “Never Trumper” as well as Hillary Clinton, George Soros, NATO, the European Union are firmly on the side of Ukraine.

Few remember about the globalist-backed color revolution coup that happened in Ukraine back in 2014. Zelenskyy is an extension of this illegitimate coup government. Then-Assistant Secretary of State for European Affairs “Toria” Nuland, a bureaucratic lap dog of Barack Hussein Obama, propped up various extremist groups, including some neo-Nazis, to engineer a coup of a legitimate government in Ukraine.

It was successful, and then tens of thousands of Russian-sympathizing Ukrainians were butchered in the upcoming years as a result of this globalist meddling. They were targeted and murdered like dogs in the street. Meanwhile, Putin has taken measures to minimize casualties throughout his incursion into Ukraine, primarily targeting military installations and other strategic targets to reduce collateral damage.

These are the facts that the globalist fake news ignores. And the Never Trumpers, led by treasonous demon Mike Pence, are already seizing upon the propaganda. They are already tying Putin to Trump, an attack that will be used as Trump goes for the presidency once more in 2024.

This is all being staged a million miles in advance, and many well-intentioned Trump supporters are falling into the propaganda. They are falling into propaganda that will be used to harm Trump, just as the “Russian collusion” lies were used to hurt Trump and attempt to oust him from office through his first term as President.

Conservatives, I urge you: DON’T BE A PAWN FOR THE GLOBALISTS!

Ukraine is one of the most corrupt countries on the planet. Zelenskyy is an actor reading a script. He is no hero. He is hiding out and putting his people in grave peril, even risking World War 3 with his psychotic demands, in order to save his weak and pathetic puppet government. Remember, these are the folks whom Hunter Biden goes to when he needs another payout for more crack and hookers.

Please, for the love of God, snap out of it, and realize you are being played. Consider this your much-needed reality check.

I always try to keep a laser focus on foreign affairs because it is extremely important and very rarely will the fake news media actually give you the truth about what is happening overseas. This is especially true pertaining to Trump’s recent summit with Putin.

After US President Donald Trump met with Russian President Vladimir Putin in Helsinki last month, virtually every elitist of our entrenched political class hollered the same refrain. They whined about treason, or Russian collusion, or about Putin being a dictator, blah blah blah. They would rather see us go to war with Russia, which would probably be World War III, than see us work together with the country on shared strategic interests.

There were very few men with the courage to stand strong with the President for extending the olive branch in times when peace and the settling of tensions are desperately needed. None of those brave folks who stood with the President had a higher public profile than Sen. Rand Paul.

Rand Paul arrived in Russia today and continues his Moscow visit right now. He endured an incredible battery of threats and ridicule in order to make this trip. He was on the receiving end of two terrorist attacks from deranged leftists triggered into action by biased mainstream media coverage against the President, one of which could easily have taken his life. His trip to Russia is already yielding results and may go a long way toward rectifying the damage done by the deep state between the two nations.

Paul announced today that Russian lawmakers have agreed to visit the U.S. Capitol in the near future. Paul met with Konstantin Kosachev, chairman of the Russia Federation Council Committee on Foreign Affairs, and the two men were able to come to that decision. They both believe that dialogue and engagement between the two nations are incredibly important. If we ever return to normalcy in our relations with Russia, we will owe Sen. Paul a great debt of gratitude.

Just like what happened in Iraq, the mainstream media launched a propaganda campaign to demonize Saddam Hussein so the deluded public would accept an aggressive, unnecessary war. They did the same thing to Muammar Gaddafi in the run up to his removal with an illegal war in Libya. They are maligning Putin not because of what he has done in the world. Truth be told, Putin’s crimes throughout the world pale in comparison to our own. We must remember the blood on our own collective hands before we unduly judge others.

The powers-that-be are calling Putin the next Hitler is because he stands against the globalist agenda, for his people, for the strength of his nation, and he is willing to ally with right-wing movements throughout the West who have similar goals. Putin may be heavy-handed in how he handles his business, but we regularly ally with authoritarian governments all the time. Just look at our long-standing allies in Turkey and Saudi Arabia, two Islamic dictatorships where Christians are tortured and open homosexuals are stoned. Putin and Trump have similar goals in stopping Islamic terror in the Middle East, and the nations’ economies are very much intertwined in the global economy.

Why should both countries not be safe and prosperous? Former President Obama was unable to secure electoral integrity back in 2016, and of course, those along with all other Obama-era disasters should be corrected. It is our responsibility to stop electoral meddling, just as it is Russia’s responsibility to stop any electoral meddling that the United States does. We should not sabotage diplomacy over espionage that is frankly routine and clearly had no impact on the actual result of the 2016 election.

Just listen to Obama himself explain how the 2016 election could never be rigged, not in a million years:

This is one of the rare cases where I agree with the former President. Trump won fair and square, and an alliance between Russia and the US should not be sabotaged because of the whining of sore losers. Protecting and strengthening the West is more important than satisfying the unstable emotions of crybaby Democratic cowards unwilling to accept responsibility for their own massive failure in 2016. That is exactly what Putin and Trump intent to accomplish, and these two leaders actually have the king-sized balls to pull it off.

Rand Paul is supporting the President and making it easier for him to pull off his heroic foreign policy agenda. We are finally defeating the neocons and returning to a policy of engagement rather than beligerence. This is what we hoped for when we were apart of the Ron Paul revolution. I would recommend all supporters of Rand and his father to rally around President Trump as he does incredible work overseas. Rand Paul could ultimately become the successor of Trump, continuing his legacy, building upon his foreign policy, and finally bringing the troops home from overseas in 2024. This is how we regain the lost momentum of the liberty movement!

Time to come together and unify around making America great again. We will unite around Trump in the homeland while Russia and the United States unite to make Western Civilization great again!

I have to alert you today about the atrocities that are happening in Syria right now.

Bashir al-Assad, the long-time President of Syria, was locked into a war against outsiders. These foreign terrorist groups were being armed with American taxpayer dollars by the CIA at the behest of Barack Hussein Obama to lay Syria to waste and make it a haven for radical Islam. ISIS was growing because of these policies. As soon as Trump became President, he reversed these policies. This allowed Russia to pulverize ISIS into oblivion.

ISIS is virtually wiped out because of the actions of President Trump, Vladimir Putin and Bashir al-Assad. God bless these three men and their heroism. They may not receive peace prizes in this evil world, but they will receive their glory in the next life.

Sadly, the fight is not over. There are interests out there – whether you want to call them the globalists, the deep state, the military-industrial complex, the banksters, or whatever – who want Syria to be laid to waste. They want a genocide in Syria like what happened in Libya. They want atrocities to happen in Syria like what happened in Iraq. All so they can line their pockets with blood money in the midst of the ruins.

The Syrians have suffered enough, and over this weekend, there was a false flag attack in their country. Although it was not covered by the western media, the Russians warned of the false-flag attack weeks in advance. The chemical attack happened in the region of Ghouta where they claimed the event would happen, bolstering the credibility of Russia’s prediction. The alleged incident was reported by the “White Helmets,” which is nothing more than a re-branded division of Al Queda.

World War III almost started today after Israel bombarded Syria, targeting Syrian and Iranian forces in the attack. Trump has vowed retaliation against Syria for unproven chemical attacks, and he has apparently bought into the lie this time around. This is the Cuban Missile Crisis all over again. The world is in peril, and we must not fall for the deception once more. We must not be drawn into another illegal, immoral, senseless war in Syria.

The Christians of the world must speak out and take action! Bashir al-Assad protects Christians from genocide in Syria. He is a secular leader who fights radical Islam. We owe him a debt of gratitude for fighting and defeating ISIS so valiantly. We cannot allow our corrupt media elites and deep state government officials to slander him, frame him for attacks that he clearly did not commit, and use that lie as a pretense to go into another war.

CHRISTIANS, IT IS TIME TO STAND UP! We have to stop an atrocity that will directly harm Christians. Christians in Iraq were ethnically cleansed from their lands following the War in Iraq. Libya went from Africa’s top country to a haven for human trafficking, terrorism, slavery and child abuse. We cannot allow that to happen in Syria. Please tell others about these facts I have brought to light and call President Trump.

Call President Donald Trump at 202-456-1111 and urge him to resist the propaganda. Tell him to stick to his instincts. He wanted to leave Syria a week ago, and now this false-flag attack has made him reconsider his initial decision. Tell him you voted for him to stand strong against the swamp, not to succumb to it. This is a make-or-break moment, and we need to tell Trump to stand for Syrian Christians and their protector Assad against the deep state and the war party. The future of the Western world may depend upon it!