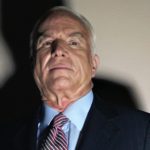 This past weekend, Sen. John McCain died of brain cancer. While I have sorrow for his family and his children on a purely human level, the way the mainstream media is attempting to turn this man into some kind of saint is beyond disgusting.

Putting aside McCain’s military service for a moment, let us look at what the man accomplished as a public official. He was apart of the Keating 5 scandal where McCain did the bidding of a bankster who defrauded Americans out of billions during his initial days in the Senate. He was barely able to survive this embarrassment early in his career.

But that paled in comparison to the biggest crime of McCain’s career: the War on Iraq.

President Donald Trump called George W. Bush’s war on Iraq one of the greatest blunders in history. He was not wrong, but he actually undershot the reality of the situation. It wasn’t just a blunder. It was a criminal act. It was the rape of a land. It was a genocide of Christians. It opened the door for radical Islam to take power. It resulted in millions of deformed children, destined to live their lives in extreme suffering due to depleted uranium being dropped upon their land by US bombers.

This was enabled because of the advocacy of John McCain. He – along with Chuck Schumer, Joe Biden, Hillary Clinton, Mitch McConnell and Jeff Sessions – authorized this war that has yielded nothing but tragedy in return. A far-leftist, pro-communist, anti-American, extremist Islamic regime is coming into power in Iraq because of the democratic reforms that were put into place. It turns out bombing a country into oblivion turns that country against you.

Who thought it would be a great idea to bomb Iraq to Hell and then introduce democracy there afterwards? None other than Sen. John McCain, the man who is being called a hero by the fake news media right now! These facts are all conveniently forgotten by the liberal spin doctors, of course. The leftist gutter trash considers McCain a hero because he spent his final days – when he was deathly ill, mentally deranged and should have been resting and spending time with family – trying to derail the presidency of Donald Trump.

But McCain was never much of a family man – that is why he left the mother of his children who had waited for him while he was captive in Vietnam for a rich heiress. His first wife, Carol, had lost her attractiveness after suffering a car accident that nearly claimed her life. McCain left her in the dirt to help his political ambitions. He later called his new trophy wife a “c-nt” in front of a gaggle of reporters while hosting them on a massive yacht paid for with his wifey’s money. This is the man who is called a champion of decency and civility by the fake news media!

Now, let’s talk about his military service for a second. I love to honor our nations heroes, but never the ones who snitch and become a rat under the pressure. McCain was called “Songbird John” by his fellow Vietnam war veterans because he aided and abetted the enemy. He recorded propaganda recordings on behalf of the communist Vietnamese government. Those tapes were leaked many years later:

Only because of his admiral daddy’s connections was McCain ever to escape culpability for his real record in Vietnam. McCain’s actual record shows a self-centered, ruthless man who would tell any lie to get ahead. He committed seditious treachery to save his own ass in Vietnam, left a sick loyal woman who stood by his side in the dirt, and perpetrated a record of evil in the Senate that few can come close to matching. We must proclaim the truth and not deify a man who represented all that was wrong with America when he was alive. McCain was a globalist, a neoconservative, a warmonger and never put America first a day in his life.

McCain’s record is being whitewashed by the mainstream media as a ploy to hurt Donald Trump and weaken his presidency. Do not fall into their trap. We must stand strong, remember to put America first, and make sure that the legacies of public officials match what they accomplished when they were alive. McCain’s record was that of the swamp personified. He kicked and screamed to stop America from being made great again in his dying days, and he is likely paying a steep eternal price right now for his wicked behavior.