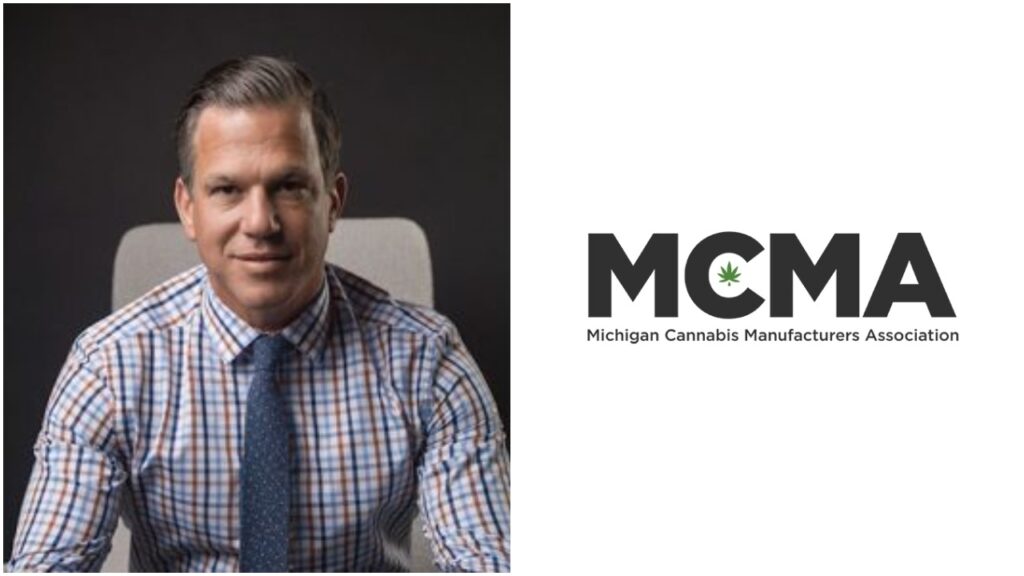 The Michigan Cannabis Manufacturers Association (MCMA), the “Big Weed” monopoly gang that is working to crush the medical marijuana industry in our state, has announced their new big lobbyist who will be working to realize their industry takeover.

After Steve “Dr. Evil” Linder was kicked to the curb (even though he is being kept in a nominal position in order escape public disgrace and humiliation), he has been replaced with Mark Fisk, a journalist turned political operative and communications expert. His firm, Byrum & Fisk, has handled communications for the MCMA for quite some time. Fisk will be taking an expanded role in the MCMA day-to-day operations after Linder failed. Essentially, Linder will be sat in the corner and emasculated in shame while Fisk really runs the show.

As I have frequently noted, Linder was the dark money pimp tugging at the strings of the corrupt Republican Party establishment for many years. Linder was wheeling and dealing with the likes of incest-accused scoundrel Lee “Coke and Hookers” Chatfield, helping Chatfield and his GOP partners make it rain nightly at various gentleman’s clubs on the 8 Mile strip. Fisk represents the other side of the political sewer in Lansing, serving at the pleasure of various Democrats.

Fisk was communication director for U.S. Senator Gary Peters when he served in the state senate during the early 2000s. He also served as press secretary for former Congressman David Bonior and was the political director for the majority caucus when the Democrats ran the state house after the 2006 midterm elections. He is renowned for his connections and his pull within state Democrat politics. He served as a spokesman for Michigan Governor Gretchen Whitmer as recently as last year. He will no doubt be leveraging his deep connections in his attempt to crush the caregivers.

>You see, the MCMA thought that Linder and his avalanche of dark money could grease the wheels and get the legislation destroying the caregiver through while we were all sleeping. This did not work. We rose up. We brought the pain to lawmakers who were dancing with the devil known as Linder, and scared them off from supporting the gangster monopoly legislation. Now, they are trying a softer and gentler approach. They are going to work Democrat lawmakers and try to pull the wool over their eyes. There will be a new song and dance from this Fisk character, but we will not fall for it.

“We look forward to continuing our work with Stephen and the MCMA over the coming months to help ensure all Michigan patients and adult-use customers have access to safe, tested and high-quality cannabis products,” Fisk said in the MCMA press release announcing his hire. “Working together, we will continue to advocate in a bipartisan way for consumer and product safety and entrepreneurship in Michigan’s burgeoning regulated cannabis industry.”

Fisk is attempting to leverage his former work as a communications consultant for Proposal 1 in 2008, which was approved in an overwhelming margin by the voters to enact the Michigan Medical Marijuana Act and create the compassionate caregiver system, to dupe the public. Fisk may have done the right thing then, but then he sold his soul and went over to the dark side. He has been working with the MCMA for many months as they have worked to destroy everything that is good about the medical marijuana industry, pushing dishonest messaging in an attempt to enact a large-scale power grab. Fisk is a bad actor and cannot be trusted.

Do not trust any of the public relations spin doctoring that will come out of the MCMA in the days and weeks to come. Do not accept any half measures. If there are Democrats connected to Fisk who suddenly start spewing the MCMA talking points, they must receive an immense amount of pressure in order to make it clear to them that they have no alternative but to stand strong on behalf of the medical marijuana industry and the caregivers. Fisk will no doubt be working his Democrat connections to rally support on behalf of Big Weed bills HB5300-02, and we must stop his deceptions and his tricks before they take root.

Regardless of where you stand on the political spectrum (Republican, Democrat or anything between), Fisk is not a man worthy of respect or admiration. He is the mirror image of Linder, even though he hides his dastardly deeds under a smoother veneer. Fisk led the infamous Committee to Keep Pot out of Neighborhoods and Schools, an anti-legalization campaign that spread propaganda to the public in order to keep prohibition intact back in 2018. He called for Republicans to legalize marijuana as a ploy to keep the question off the ballot, which would have allowed the legislature to come back and rescind their measure at a later date. Fisk pushed this sneaky plot, which was ultimately rejected by Republicans, as a pretense to deny the people their voice in order to satisfy his lobbyist backers.

Fisk is especially dangerous because of his continued involvement with Governor Gretchen Whitmer. He has not only served as her spokesman, but also as a front man of her affiliated dark money groups. Fisk served as spokesman for the Progressive Advocacy Trust, which spent $2 million to help Whitmer get into the governor’s office. Another dark money group, Build a Better Michigan, was cited for major campaign finance violations back in 2018. It has since been rebranded and reformatted as “Road to Michigan’s Future” for the upcoming election cycle, and Fisk is once again involved in these efforts. It should therefore be assumed that Fisk will be using his influence with Whitmer to harm the rights of caregivers.

We cannot take our success and momentum for granted. Yes, we got Steve Linder removed after exposing him, sullying his reputation, and now his balls have been cut off and he has to get coffee for his replacement after losing so hard. But the monopolists will never stop. That is why the Michigan Caregivers Association is establishing a permanent presence in Lansing, and we will be expanding greatly next year. We know nothing short of eternal vigilance will preserve our rights. Fisk will be working the Democrat angle in a similar manner as Linder worked the Republican angle. But these lobbyists, once exposed, cannot stop the people once we are activated. We will fight, we will succeed, and we will go on the offense against this attempted siege of our sacred freedoms.

I have some great news that should give hope to every activist in the state who cares about freedom, liberty, democracy and accountability in government.

The Michigan Cannabis Manufacturers Association (MCMA), the “Big Weed” lobbying firm that is working to destroy the medical marijuana caregivers system in order to seize a monopoly, has fired Steve Linder, the dark money kingpin who had been working behind the scenes to coerce lawmakers into passing HB 5300-02.

The Michigan Caregivers Association (MCA), a group which I founded to protect the rights of the caregivers, put Linder at the forefront of the policy debate – considered a controversial move at the time. We plastered his greasy mug all over ads, billboards, and made him the focus of the debate, comparing him to Dr. Evil from the Austin Powers flicks. Our heavy-handed tactics changed the debate from being centered around Linder’s phony talking points on “patient safety” to the Big Weed takeover that was actually taking place. We made a lot of noise, and it paid off.

Rats like Linder do not like when the light is shined directly upon them. They prefer to work in the shadows and make their dirty dealings without scrutiny. It’s called “dark money” for a reason. These lowlifes want their money and influence hidden from the public. We took the battle to the public. Linder cracked under the pressure. He made a fool of himself repeatedly. Lawmakers no longer wanted to be associated with him. His legacy is permanently tarnished as a result of our due diligence. The age of gangsters like Linder controlling the legislature are coming to an end.

The Michigan Caregivers Association claims the proverbial scalp of Linder. This is just the beginning. This is not an aberration. We are growing rapidly and building the infrastructure to expose the bad guys like never before. We put all other Linder wannabes on notice: You will be next. You will be pissed out of Lansing in disgrace just like Linder. You will be exposed, you will be righteously vilified, the public will view you as the pariah that you are, and then your Big Money backers will toss you out unceremoniously like a used condom from a strip club backroom session with Matt Hall, Lee Chatfield and taxpayer-funded escorts.

We know that the MCMA and the wannabe cannabis monopolists are not throwing in the towel just because Linder is history. They will continue to agitate against small home growers, medicine providers, cancer patients, small business owners, and others who stand in the way of swelling their bottom line. MCMA board chair Shelly Edgerton is expected to take a more substantial role in the organization after Linder’s ouster. Edgerton, while certainly a less odious and grotesque figure than Linder, has the same establishment Republican and Lansing bureaucratic ties as Linder and is pushing for the same agenda. She wants to crush the little guy and pave the way for a monopoly. She will be thwarted as well.

It has been proven that the current testing regime is a joke and potentially-contaminated weed will always make its way on the shelves when the big players want to make profits. State regulators have focused on restricting caregiver product, and this has caused tremendous damage to the cannabis industry in Michigan already. Now, tons of inferior product are being flooded onto the streets, including contaminated flower, and the industry is in shambles. If this continues, the compassionate caregiver system that produces life-saving medicine for thousands of patients across the state will be crushed forever. This is economic terrorism by the corporate machine. It will not be tolerated.

The Michigan Caregivers Association will enjoy this victory and this momentum we have built, but we will not take our success for granted. We know this is a never-ending fight to sustain our freedoms. If we take our eyes off the ball, that will allow the MCMA and their new henchwoman, Edgerton, to come closer to achieving their marijuana monopoly. Cannabis cannot become corporatized and corrupt like every other industry. This is the final frontier where the little guy can thrive in a free and fair market based on their ability to grow the best product. We demand a broad and shared prosperity. Nothing else is acceptable.

Be on the lookout for legislation that is in the works in Lansing that will prevent municipalities from adopting ready-made ordinances created by the MCMA and their cronies to destroy the caregivers at the local level, now that their monopoly bills have stalled in Lansing. We are going on the offense and beginning to roll out our Caregivers’ Bill of Rights that will give additional opportunities for superior caregiver product to be enjoyed by Michigan residents. Cannabis is now an unstoppable powerhouse, the nation’s #1 cash crop, and the individuals who put their lives on the line to create this essential industry ought to reap the full rewards of their blood, sweat and tears.

Please consider donating to the cause here.